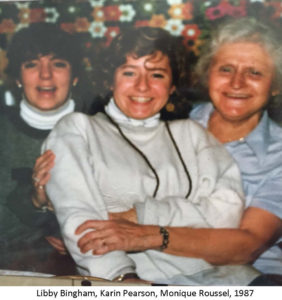 Thirty years is a long time; some may even say it is a lifetime. And if you want to maintain a relationship, it is a lot of hard work. But that’s exactly what we were able to do.

This year, my friend, Karin, and I celebrated our 50th birthdays and we wanted to do something big to mark the occasion. We are both married, her with two boys, me with one. We both work full-time in metropolitan cities and are generally exhausted. But 50 years calls for something big.

Thirty years ago, we were both year-long students with SU Abroad (then called the Division of International Programs Abroad, or DIPA). We had both been studying French and were accepted into the Strasbourg program, where we would be living with a host family for a full year. When we arrived, the director asked if there were any volunteers to “buddy up” so we shrugged and said, pourquoi pas? As we met our host mother, Monique (Mo for short) for the first time, she looked at us and said, “huh, I thought you would be boys.” We were not (we are not), but we did become known in our house as La Petite et La Grande.

We spent a lot of time with Mo: we ate breakfasts and dinners together; we visited her sons and met her first grandchild in Paris; we traveled in and out of quaint Alsacian towns and villages; we went pottery shopping together; we drank wine and ate tarte flambée; we were special guests at her “English Speaking Community”; she took us to hear Handel’s Messiah performed live at L’Eglise St. Paul; she went with us to Germany to watch a German movie about Wagner with French subtitles; at home we watched bad French variety shows and talked about the U.S. stock market crash; she helped us through parental health scares and the death of a beloved aunt; she corrected our French and scolded us for staying out late and hanging out with boys instead of studying. She was – in every way – family.

We were both fortunate enough to have our American families come visit at different times of the year. Mo was a warm and generous hostess and our relationship with her expanded. When we left Strasbourg, she came and visited us in our respective U.S. homes. We each went back to Strasbourg to visit her on separate occasions with husbands or friends. Every year, Karin would send her a Christmas card with pictures of her family (I was more hit or miss, making every 2 – 3 years). When Karin and I would gather with our own families every summer, we’d be sure to take a photo and send it to her. I would, occasionally, get up the guts to write her a newsy letter in (horrible) French. We did our best to stay in touch.

But time marches on and we all continue to age. For Monique, who had always had problems with her hips and knees, her health issue became limited mobility. Gone were the days of traveling to the U.S., zipping around France in her Toyota, and (eventually) even walking. We would hear from her or her sons about various surgeries and recoveries in the South of France. But this last time, she suffered a post-surgical infection and her recovery was somewhat dicey; not surprising for someone who is 85 years old, but worrisome nonetheless. Karin and I decided we needed to return to Strasbourg. 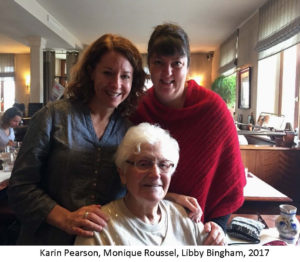 And so, on the occasion of our 50th birthdays, we decided to travel back for our 30th Strasbourg anniversary to spend time with Monique and conduct our own Nostalgia Tour (no husbands or sons allowed!). Preparation was cumbersome as Monique does not have email and our French has deteriorated over time, but we managed – with the help of her technologically savvy sons – to make arrangements to visit her for about a week. She invited us to stay with her, which we gratefully and eagerly accepted.

When we arrived, all the memories came flooding back: same street, same door, same elevator to get upstairs, and when the door opened…same Mo! It was truly like coming home. Familiar furniture, turns of phrase, and smells allowed our memories to open up. Things that we had forgotten came flooding back, including our French (much diminished but not completely lacking); every turn of a street sparked an image or story. It was truly a journey of rediscovery, whether it was our favorite café, finding the DIPA center, or stopping at Mo’s boulangerie.

While we stayed with her, we asked for all the stories behind her knick-knacks and paintings, and went through all of her old photo albums together. They were full of all the photos Karin and I had been sending for thirty years, plus photos of us as twenty-year old students and some of her other hosted students, of whom there were many. But not all of them continued strong over the course of the years, with most petering out after just one or two photos of a marriage or the birth of a child. There was one student who rivaled us in amount of space earned in the albums, but very few who came after us in the chronology. We discussed this with Mo and realized that our bond with her was unique – as she mentioned on that first day, she thought we would be boys. Mo raised three boys of her own and as a result, she always hosted male students. When we came along, she had hosted one girl for just a short period, a summer program of some sort; our longevity was unique and new. We were able to give her a glimpse into what a mother-daughter relationship might look like, how the companionship of women is something different from men and how the tie is made of different material. We had a year together to forge this bond and it has lasted for thirty years.

We will continue to send her pictures, write grammatically incorrect letters and make nearly unintelligible phone calls, but we will probably never again have the opportunity to spend quality in-person time with our French host mother. We are grateful for the time we’ve had together and the humor, lessons and texture that our year with Mo has added to our lives. Thank you, Syracuse University, for providing the back-drop for our experience. We each have our own personalities and curiosity about people which serves to make each of our lives rich and interesting. But we believe that 1987 – 1988 was a time of deep connection spent learning about a people, a language, and a culture that has enabled us to approach every life experience with an eye towards long-lasting impact, not the least of which is on our relationship with Mo and our friendship with each other.