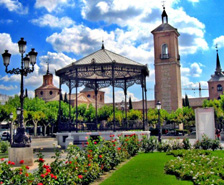 Pay a visit to the Roman city of Complutum origin of Alcalá de Henares, birthplace of the writer Miguel de Cervantes (author of Don Quixote) and home to one of the most prestigious universities in Spain. Alcalá amazes its visitors with its monumental churches, convents, and picturesque streets. 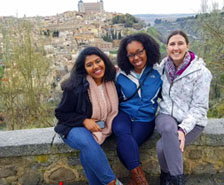 Syracuse Madrid offers students the possibility to relive the drama and excitement of some of the most amazing chapters in human history while enjoying this beautiful and historical city. Perched high up on a hill and surrounded by the Tajo River on all but the north side, Toledo initially seems more like a stone fortress than a city.

In the past, and perhaps even more so today, Toledo was known as “the city of the Three Cultures” because under tolerant Muslim reign, there lived a significant Jewish population alongside a Christian minority. This cultural coexistence has left behind many amazing legacies: beautiful synagogues, mosques, and churches. Now, with the growth of tourism in Spain, Toledo has now become not just a favorite, but a must-see for visitors to the Madrid area. 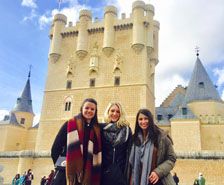 Segovia is a quaint medieval World Heritage City built around a beautiful castle, a magnificent Gothic cathedral, and an impressive Roman aqueduct. It also boasts an old Jewish quarter, stately homes, outstanding views, and a vibrant greenway, which is ideal for a pleasant stroll in the sunshine. In Segovia, you will feel and taste Spain’s very essence as we learn about its vibrant history. 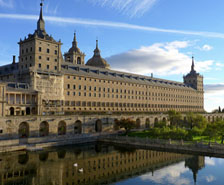 El Escorial is an awe-inspiring palace-monastery complex just outside Madrid, which served as the residence of King Philip II and his court. Declared a World Heritage Site by UNESCO in 1984, the Monastery and Real Sitio de San Lorenzo de El Escorial are the soul of this mountain town, which attracts thousands of visitors every year. Students will have the opportunity to learn about El Escorial in situ on the Syracuse Madrid day trip.

And many more! Link